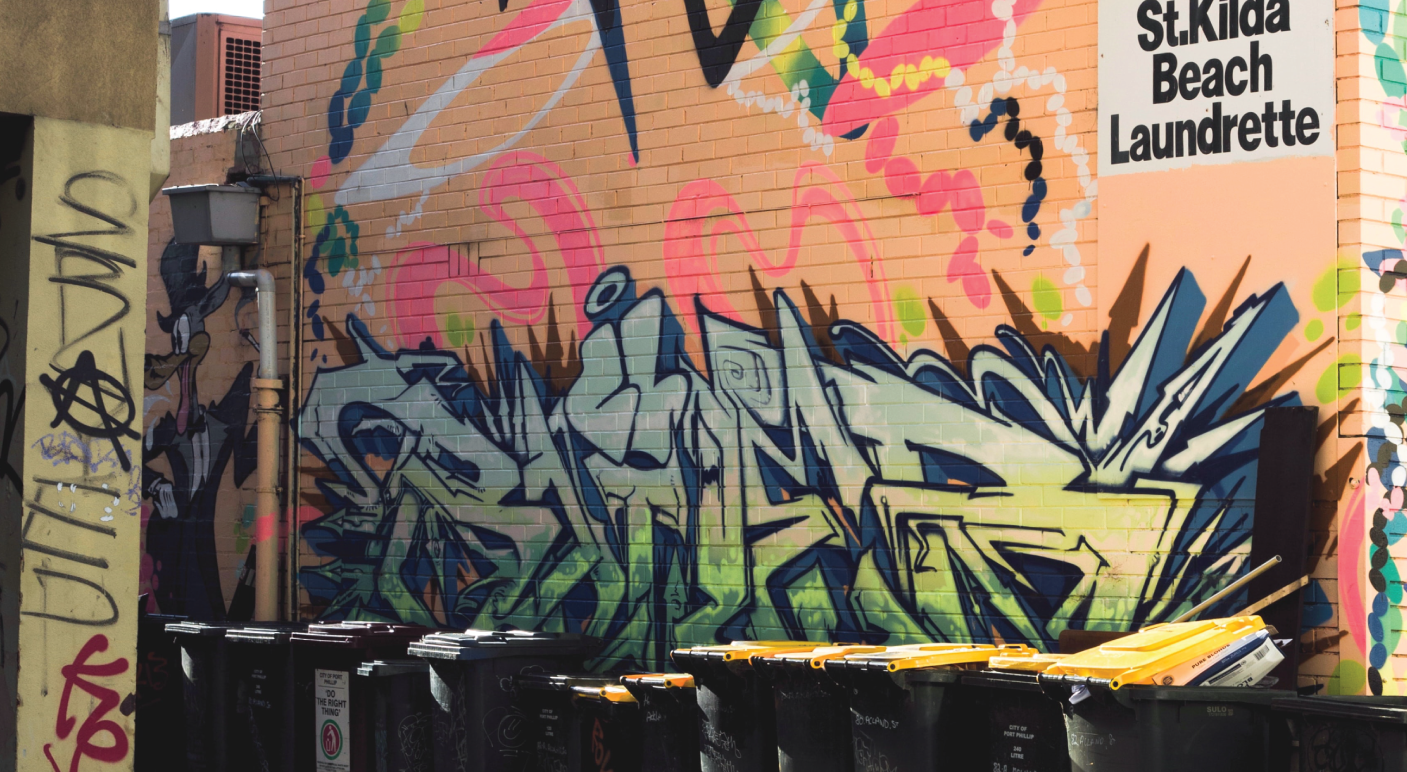 Fall in love with Melbourne

Between the alpine forests of High Country and the tempting waters of the Southern Ocean, Melbourne is a chic metropolitan city teeming with a vast array of cultures, breathtaking landscapes, and incredible wildlife that can only be found in the land Down Under.

#1 Wander down the winding alleyways 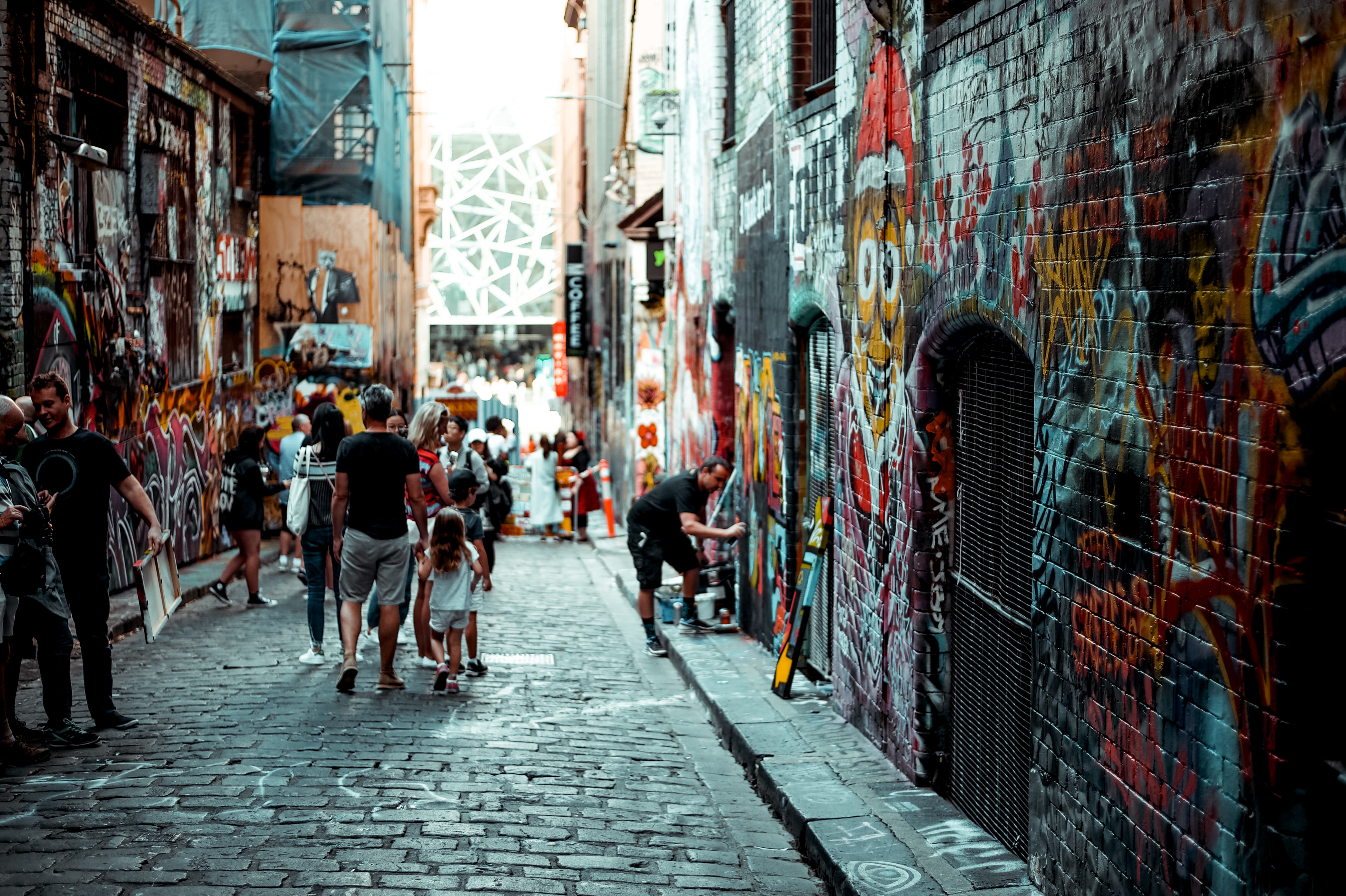 As the country’s street art capital, the graffiti-adorned laneways of Melbourne are a testament to the creativity of its residents. From framed artwork to mind-bending murals, alleyways weave and sprawl into an impressive gallery knitted together by the skilful hands of many local and international artists from all walks of life.

While every lane showcases a different side of the city, you should definitely check out the heavy hitters - Hosier Lane, Tattersall Lane, and AC/DC Lane - Melbourne’s love letter to the era of down and dirty rock ‘n’ roll. Beyond the dizzying array of colours and electrifying vibes, these alleyways are crammed full of old-school eateries, quaint boutique shops, and dive bars at every turn. 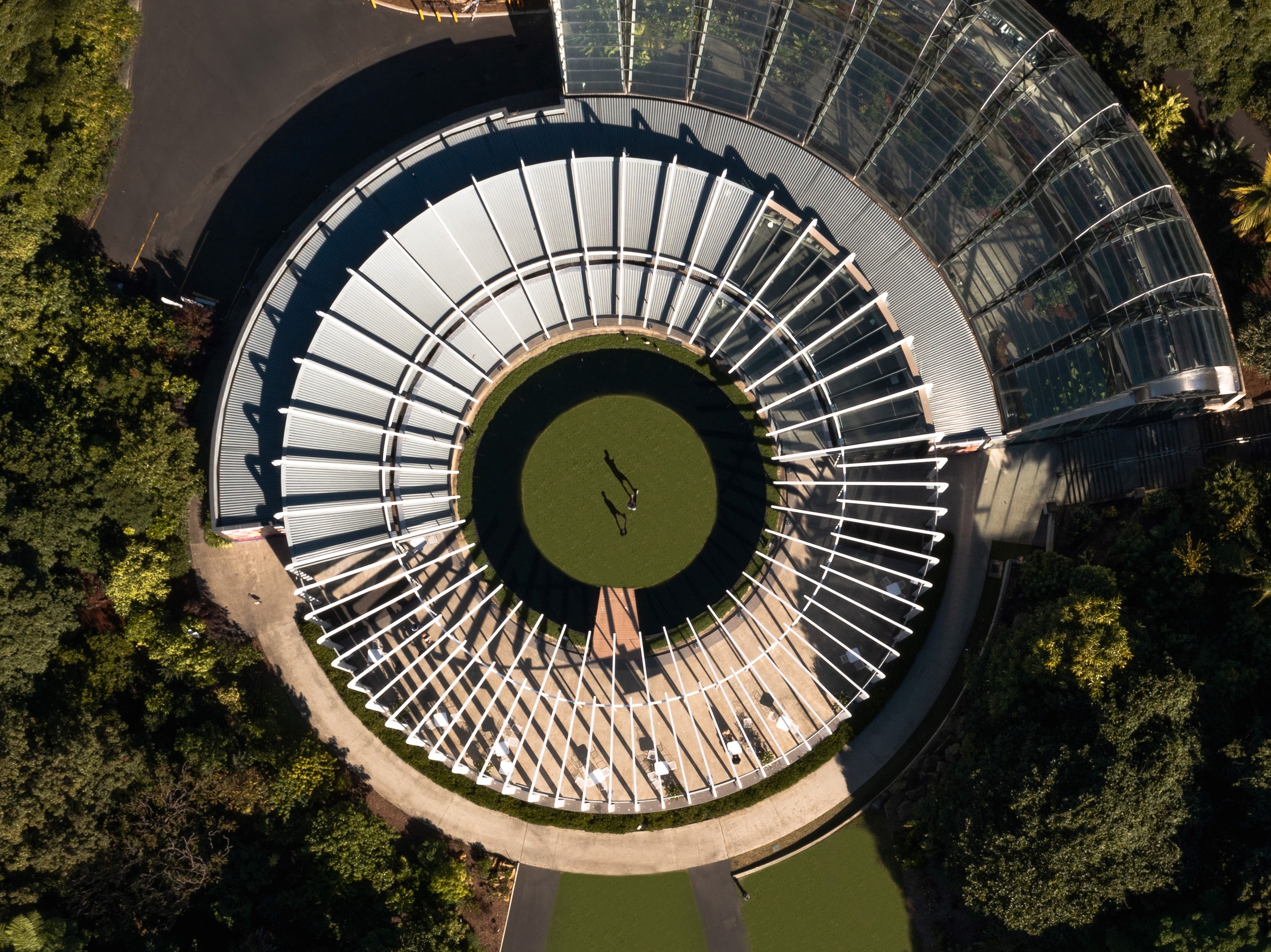 If you think Melbourne is all about swanky art and hipster coffee shops, think again. Known as the city’s oasis, its gardens’ sweeping lawns and tranquil lakes make Royal Botanic Gardens an ideal picnic spot. Boasting a myriad of incredible plant collections that range from region-specific plants to rare and threatened species, the garden is ranked one of the must-visit highlights of Melbourne among nature lovers.

After reconnecting with nature, we recommend checking out the Aboriginal Heritage walk, where you’ll get to experience a traditional smoking ceremony, sip on lemon myrtle tea, and learn about the native flora integral to Australia’s indigenous culture.

#3 Explore the cultural hub of Fitzroy 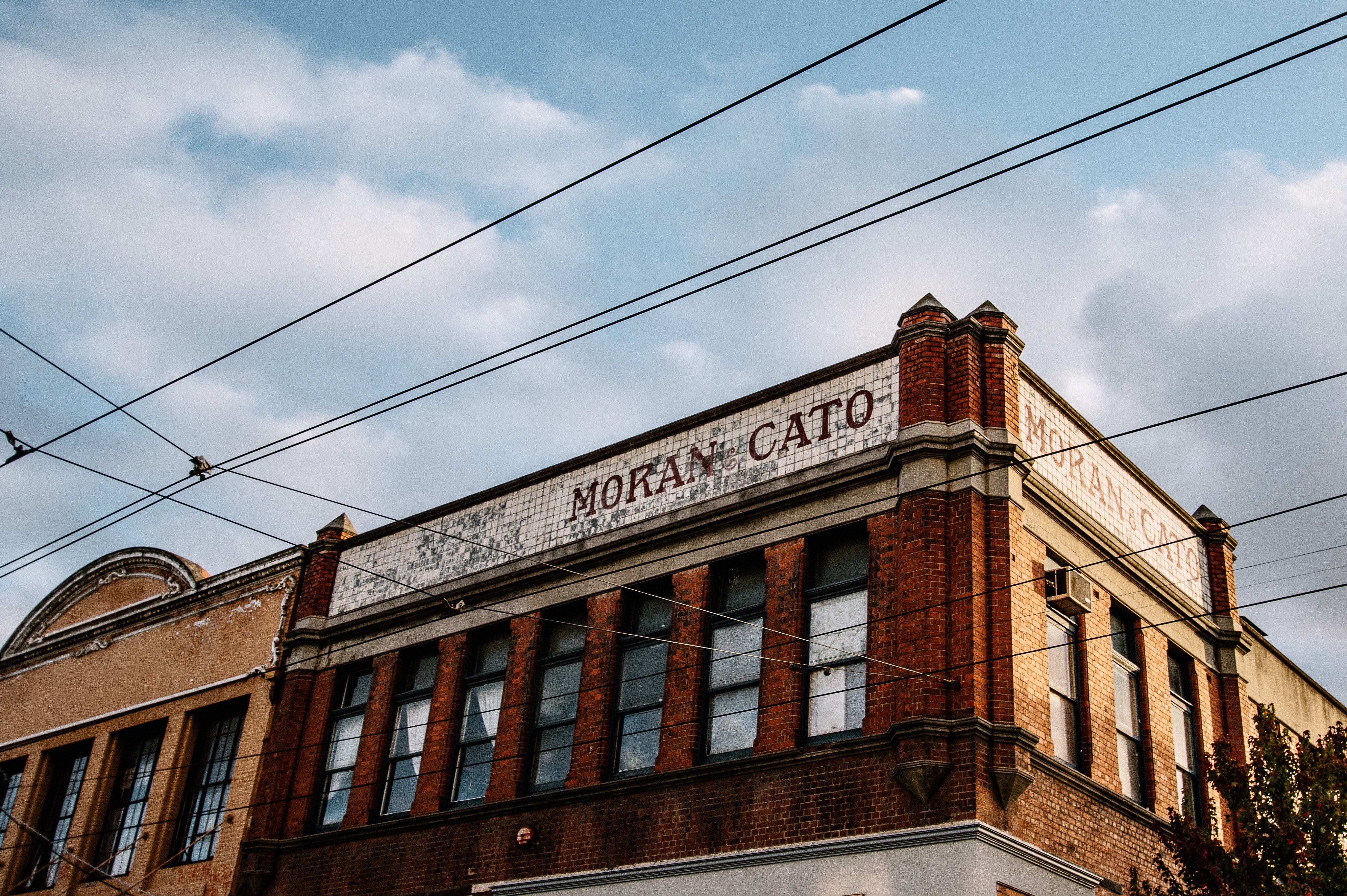 Known for its ensemble of live music venues, eclectic dining spots, and alternative fashion shops, Fitzroy is where Melbourne shows off its Bohemian edge. Having undergone decades of urban revitalisation, the heritage buildings and Victorian-era architecture that remain continue to play a key role in the area’s ambience.

Head over to Gertrude street, a little strip that links Fitzroy and Collingwood. While unassuming at first glance, the small street packs a whole lot of culture and creativity into a one-kilometre nook. If you’re looking to add some colours and class to your wardrobe, move down the line of independent designer stores that spin vintage dresses and double-breasted suits out of the finest fabrics. To complete the look, swing by one of the old-school barbershops that smell of pomade and shaving cream for a sweet pompadour that’s bound to get you some doubletakes.

As the day wanes, go on a pub crawl on Brunswick street and let the diverse genre of music etch the soul of this lyrical city deep in your heart.

There’s a saying among folks with a weakness for asian cuisines. If you’re planning on going to Chin Chin, you’re going to have to plan on waiting. Tucked in the heart of the city, this modern Southeast Asian haunt on Flinders Lane is a very Melbourne take on Asian dining halls. Bold flavours, naughty cocktails, and a whole lot of fun. Pair the crowd-pleasing sticky pork or crispy barramundi salad with a glass of Bloody Mary and you got yourself a kickass evening.

Think peanut-crusted soft-boiled eggs, coconut and pineapple brioche, and specialty coffee brewed with the finest beans sourced from Papua New Guinea. If brunch is the name of the game, Industry Beans is playing for first place. Raved as the must-visit brunch spot in Fitzroy, Industry Bean has established itself as one of the city’s best boutique cafes. If you’re in the area and in need of a pick me up, be sure to grab a bottle of cold brew or two that’s been a cult favourite since 2017.

Named after his beloved daughter, Matilda is a passion project of Melbourne chef Scott Pickett. While decked out in elegant barrelled ochre ceiling, complete with hewn blackwood tables and leather banquettes, the interior and mannerism of its staff hints of a more casual approach than many of Pickett’s fine-dining endeavors

Here, the emphasis is on fresh locally-sourced seafood and choice meats prepared over hot coals and crackling open flames. While you may be eager to launch into the main course section of the menu, you’ll do well to start with the widely-raved brunt bran-speckled spelt bread. For carnivores who’ll settle for nothing less, we recommend going for the Macedon duck that’s smoked over cherry wood, stuffed with pickled cabbage, and served like a sang choi bao. For seafood lovers, be sure to order the octopus tentacles that received a three-day massage before hitting the grill. Lastly, let Pickett’s Tarte tatin flecked with smoked vanilla end your phenomenal meal on a sweet note. 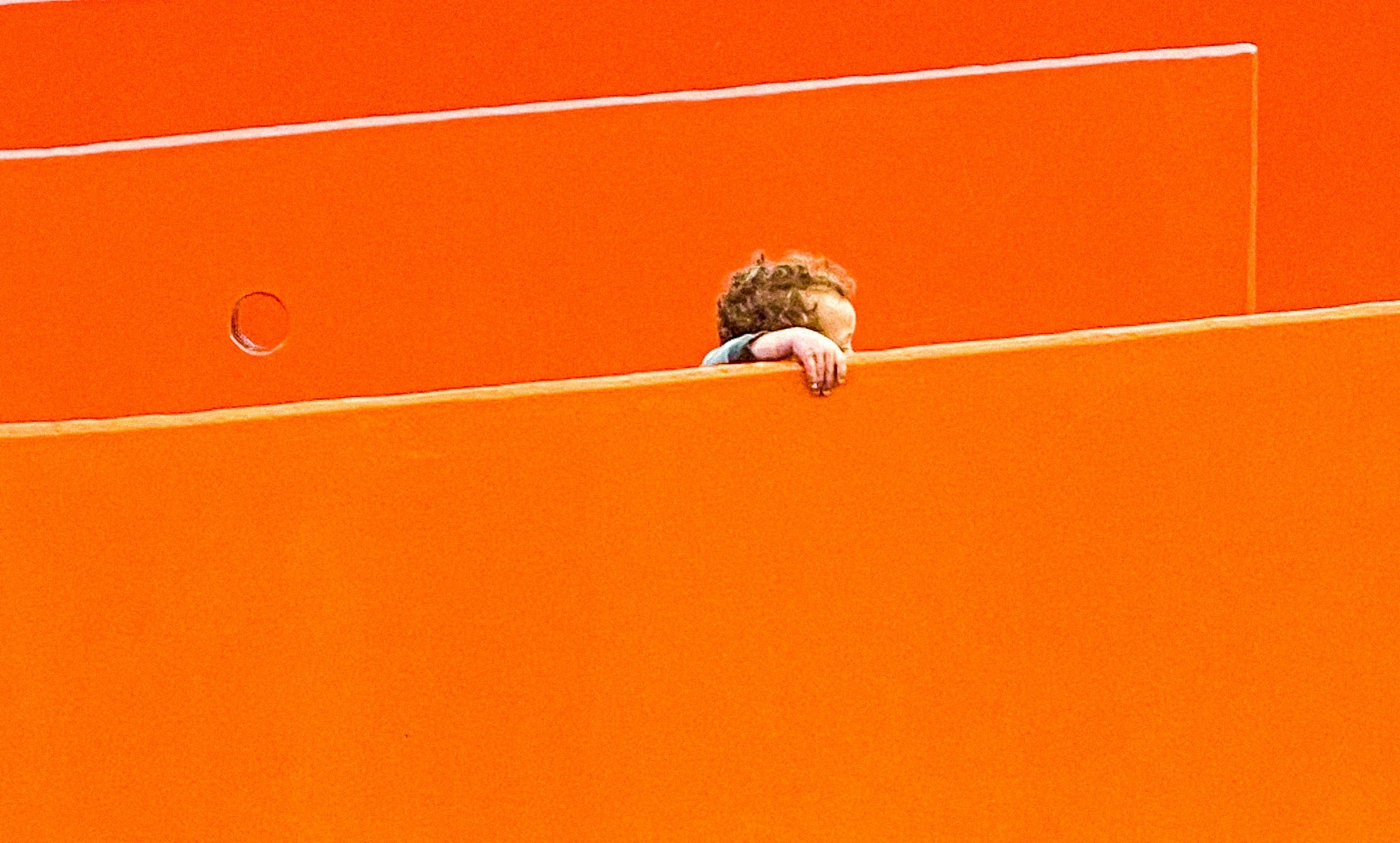 Nestled in the historic Carlton Gardens, the Melbourne Museum is the largest museum in the southern hemisphere. Within it, the city’s history stretching back thousands of years unfolds like a path that invites all to step in. Step back in time and learn about the history of Victoria before European settlement at Bunjilaka Aboriginal Cultural Centre. Check out the First Peoples exhibition, which details the story of the land from its genesis to the present day. Discover the plants and waterways pivotal to the early life of the Aboriginal people of south-eastern Australia as you stroll through the indigenous Milarra Garden, where a trail passes native flora and fauna en route to a cave with rock paintings.

If you’re travelling with kids in tow, let them run amok at the two playgrounds situated conveniently within the gardens. It will be a welcomed activity after all that learning in one day. 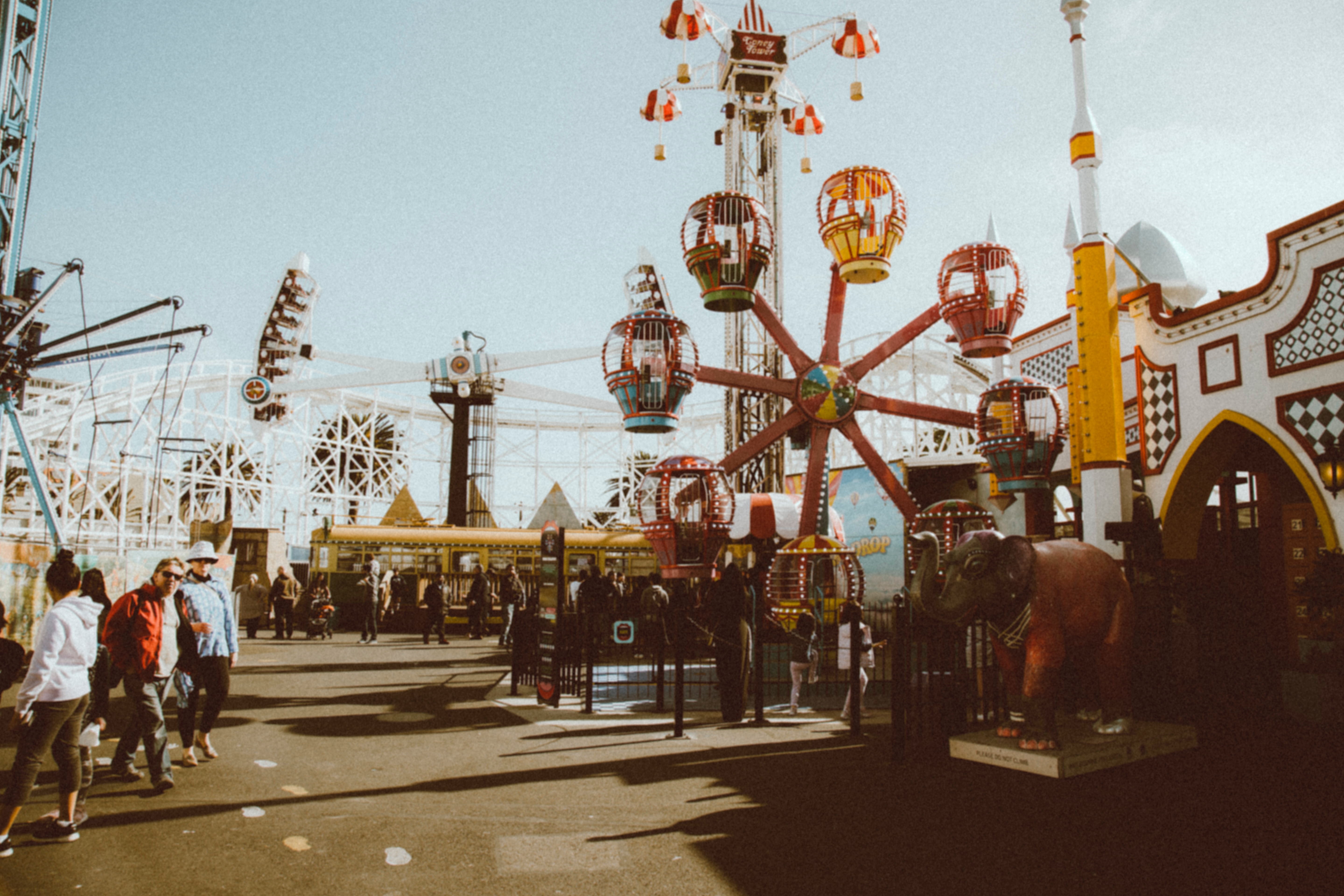 Step in through Mr Moon’s gaping mouth and you’ll arrive at the historic theme park that has delighted Melbournians and tourists alike since 1912. Perched on the foreshore of Port Philip Bay in St Kilda, Luna Park is home to the famous Great Scenic Railway, the oldest rollercoaster in the world that treats thrill-seeking riders to a spectacular view of the city and the cool touch of fresh ocean breeze. For the lion-hearted, check out the Ghost Train, Pharoah’s Curse, and House of Horrors and put your courage to the test. To make the most out of the visit, we recommend getting the Unlimited Ride Ticket if you’re looking to get your heart pumping.

When nightfall, soak up the festival vibes, grab yourself some sinfully-delicious hotdogs, and bask in the warm glow of the 6000 lights adorning the magical and heritage carousel as the park flickers to life. 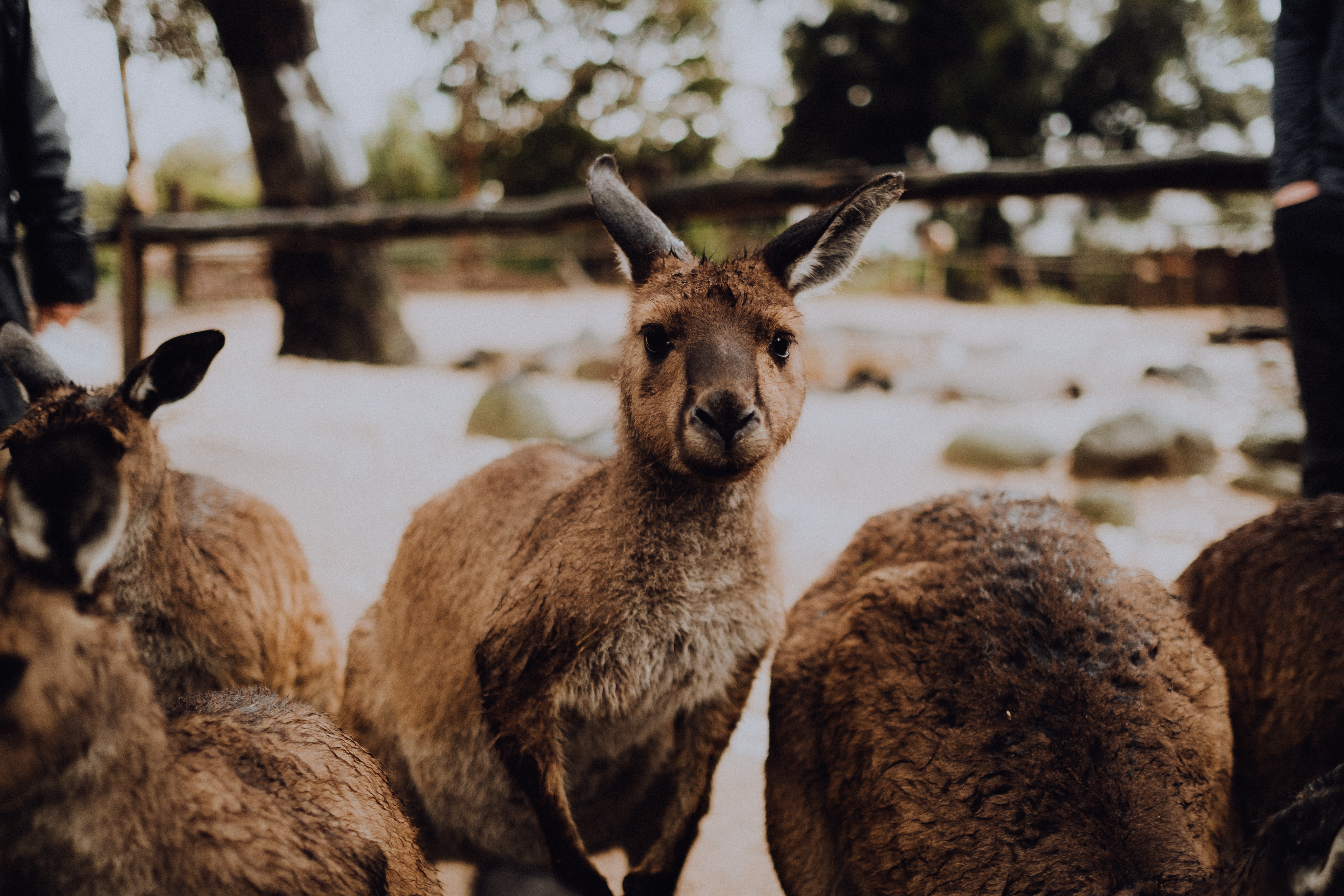 Also known as the Royal Melbourne Zoological Gardens, Melbourne Zoo is one of the largest zoological parks in the country. Inspired by the London Zoo, the park was inaugurated in 1862 and became home to 320 species of animals, many of which are native to Australia and were previously living in the botanical gardens in the city.

Unlike most zoological parks, animals of the Melbourne Zoo are free to roam in the areas that are built to resemble their natural habitats - the most popular being the trail of the Elephants, Gorilla rainforest, and Lion Gorge. For close encounters with Aussie natives, be sure to swing by Australian Bush to catch the wallabies, Tasmanian devils, and wombats alongside a whole range of native birdlife including emus, red-tailed black cockatoos, and honeyeaters. If you have some time to spare, be sure to join in one of the “Meet the Keeper” talks to learn interesting facts about the inhabitants of the zoo.

This feature article is written exclusively for our American Express BlackBook Travels offer. American Express Card Members can enjoy up to 30% off hotels worldwide for bookings made by 7 September 2022. Travel must be completed by 31 December 2022. Click here to learn more.