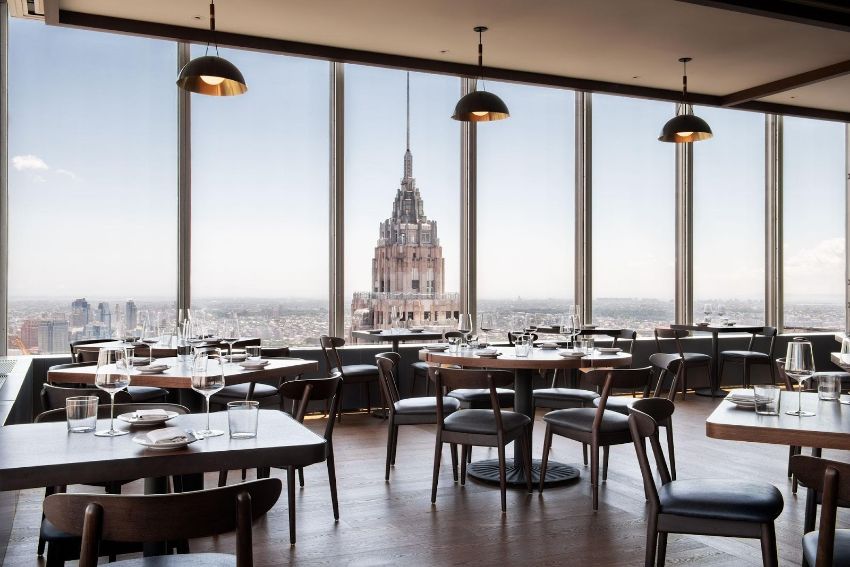 While there is no shortage of French restaurants in the financial district, you will be forgiven for making the novice mistake of lumping Manhatta with the other boys on the block. Apart from a name that screams opulence, what one would usually find at a high-end restaurant, namely the usual white tablecloth and steep prices that send one’s eyes racing to find the cheapest item on the menu, are nowhere to be seen.

Perched upon sixty stories above Lower Manhattan, the floor to ceiling windows provide diners with a panoramic view that overlooks the surrounding rivers, bridges, and skyscrapers; while acting as a shield against all the bustling of the city that may disrupt meaningful conversations taking place over the savouring of delectable dishes thoughtfully prepared in the open kitchen.

If you are one of those with a quote-unquote, refined palette, the luxurious Lobster Quenelle and the fatty, char-crusted Wagyu Bavette will not disappoint. Delightful post-dinner treats such as the fluffy Date Cake and creamy Vanilla Souffle will add a nice touch to an already perfect meal.

A place that serves mouthwatering food and provides diners with a gorgeous view of the city, there’s no prize for guessing where you’ll be dining at the next time “tough to please” mother-in-law is in town. 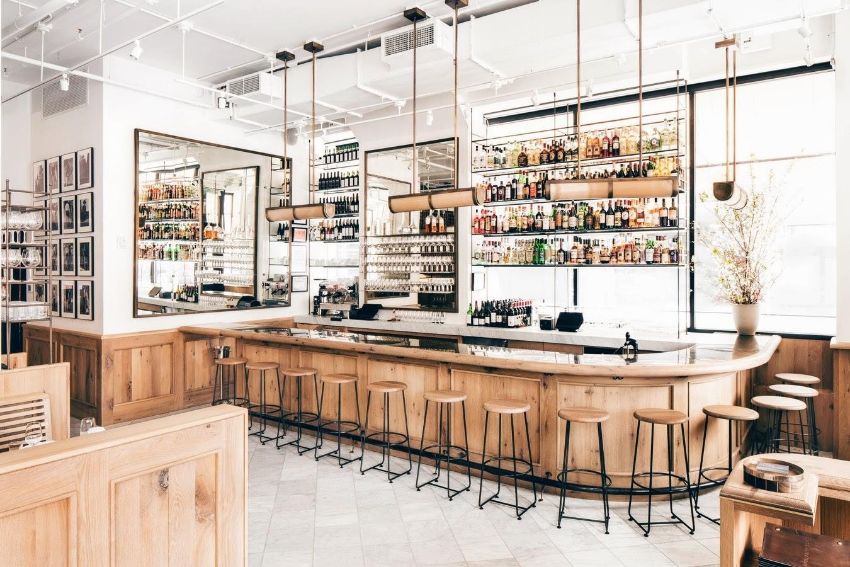 Having learnt to cook pasta and ragus from his Italian grandmother at a relatively young age, Chef Matto now whips up appetisers and mains such as the classic Octopus with a side of potatoes and preserved lemon, and Steak with grilled beets and Taleggio, that often leave diners wondering: “what sorcery is this?”.

Cafe Altro Paradiso treats every dish akin to a seasoned magician performing his hundredth show, with much finesse and no complacency despite having mastered the craft. The minimalistic presentation of each dish allows every component to speak for itself, resulting in an elevated dish that’s more than the sum of its parts.

It is apparent that not only has much thought been put into perfecting the food served at Cafe Altro Paradiso; the white and wood interior coupled with large windows allow ample natural light to pour through, resulting in a welcoming space that proves difficult to leave. 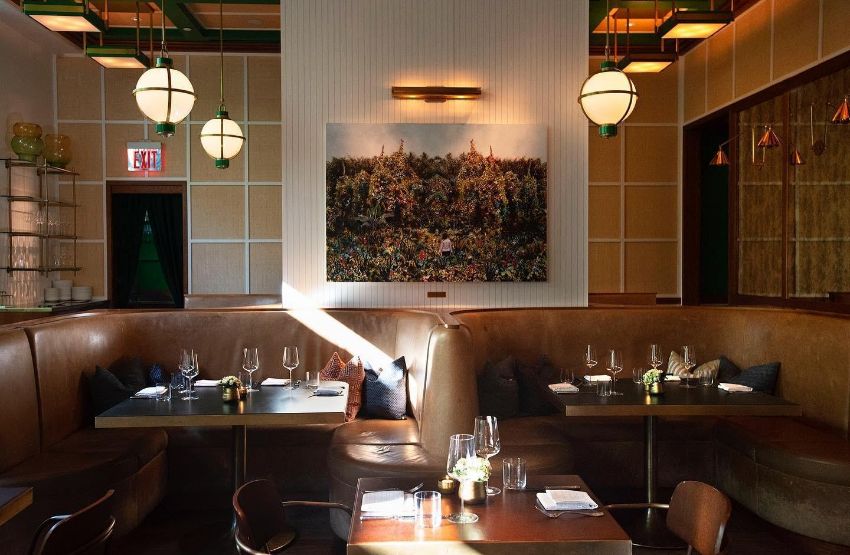 Not all clients are equal, and they shouldn’t be treated as such. Legacy Records is one of those restaurants that personify the old adage: “you can’t catch a whale with a worm”. Legacy Records is the line in the sand that separates regular clients from those big-ticket clients whom you wish to impress and have one (too many) drinks with at the end of the night. If your clients aren’t impressed by the allure of high ceiling and flooring made out of tile and hardwood, there’s a good chance that they may not like you as much as you think.

What’s served at this quintessentially Italian restaurant will not catch you by surprise, but they are classic food done well. One of the highly praised dishes is the Dry-Aged Ribeye; firm while having the right amount of marbling. A dish so exquisite that it almost feels wrong when consumed in a rush or in a flippant manner. For those who prefer their food sourced from the ocean should give their popular item, the Sea Trout a try; each flaky bite bursting with flavours that have permeated the entire fish.

Though the food options may sound lacklustre and all too familiar to some, when executed as well as they do at Legacy Records, it’s a testament to the quality of the ingredients used as well as the skill of those who have prepared them. 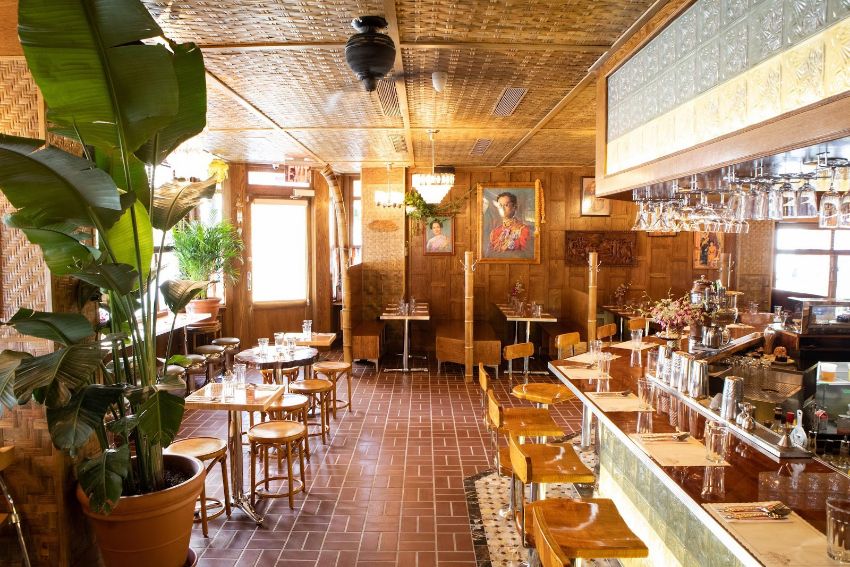 The 65-seat restaurant situated on the corner of Kenmare Street, is a prime example of an establishment that tells a good story with the food it serves. From the moment one passes through the doors, it is clear that the owners have expunged any last trace of pretentiousness from this diner.

From the dishes it serves to the eclectic decor furnished with low bar seats, Thai Diner is an extension of the owners’ Thai-American heritage that’s integral to their identity.

In the very words of Ann Reddings:

“Very traditional Thai food from my mother, but also classic American fare from my dad’s side of the family. Thai Diner is our way of bringing it all together.”

When it comes to food, one can expect to find innovative dishes such as Steak and Eggs served with a spicy dipping sauce and sticky rice (good luck trying to find this anywhere else), and sweet treats such as the Thai Tea Babka French Toast, among other American classics that have undergone a Thai makeover. Similarly, drinks straddle both Thai and American influences; the result is many delightful concoctions such as a dry martini with shrimp-infused vodka, and a glass of surprisingly smooth Thai Rum. If you are looking towards a casual dinner that does not compromise on innovation and quality, Thai Diner might be what your team needs after a long day of meetings and paperwork. 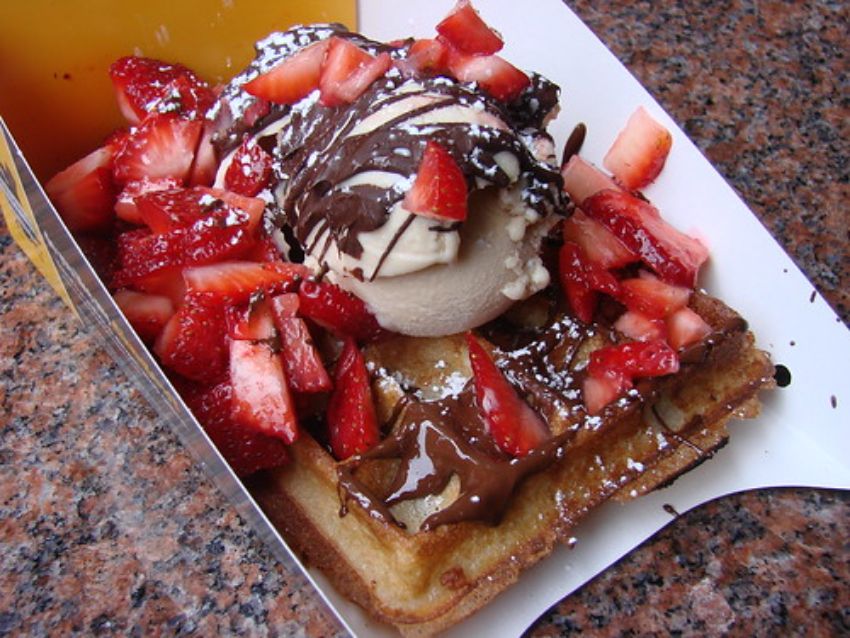 Photo by Brownie via Midtownlunch

Manhattanites have spoken, the verdict is out. Next to the widely popular The Halal Guys, Wafels & Dinges have clinched the second spot in the hearts of New Yorkers and tourists with their signature piping hot Belgium waffles. For those looking for a quick bite between meetings, a waffle is a no brainer. Waffles at Wafels & Dinges come with a wide selection of toppings for customers to choose from; spekuloos spread, vermont maple syrup, and Belgium chocolate fudge to name a few. For new employees looking to score a few points would do well pick up some luxuriously sinful waffles from Wafels & Dinges. Sit back and relax while those mindblowing waffles sway the waffling minds in your favour.